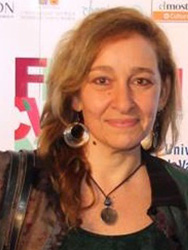 A graduate from the University of Utah, USA. Earned a B.S. in Psychology, while working as an Audiovisual Technician for the University of Utah Film School (4 years). Simultaneously develops as a bilingual and multicultural professional. With more than 15 years in both fields, she has worked as an independent film programmer, executive and general producer for film, television and film festivals. She was President of the Managing Committee of the Creative Industries cluster of Los Ríos Region (BID-Corfo project), which highlighted filmmaking and the regional audiovisual industry among its areas of promotion and development. She later accepted the nomination as Regional Advisor for the CAIA (Council for the Arts and the Audiovisual Industry). Founding member and Executive Secretary of the Association of Regional Film Commissions of Chile (NGO), FILMINCHILE (AFCI) and Professor of Film and Audiovisual Communication, Viña del Mar University, Chile. In the area of languages, she founded her own language services company in 2006, specializing in language solutions, creative writing, text translation, subtitles and grants, simultaneous interpretation and international public relations.

I have ample experience in the field of communications and language. I worked for OHSU Dept. of languages (Portland, Oregon) for 4 years in routine and high risk environments as a medical interpreter. Beyond the language skills and having travelled and lived in different countries, I am also a multi-cultural individual with extensive and diverse work experience. I founded my own company in 2006, to provide language services to a wide client base. I have also developed as a film producer and film commissioner over the last 10 years, applying production and bilingual skills to several film and audiovisual productions (film, TV and Film Festivals). I have also done consulting work for government planning, budget allocation and project evaluation for the Chilean ministry of Culture and the Arts, and was president of the board of the Creative Industries Cluster in the city of Valdivia, Chile.