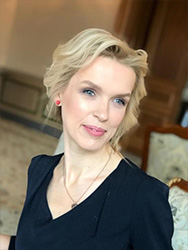 An experienced marketer and an expert on the Russian economy and Education abroad.