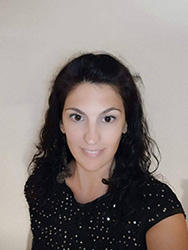 I believe that teaching is one of the most challenging but satisfying jobs in the world. I have taught both overseas and in my native Italy. This has given me the opportunity to work with students of different cultural backgrounds, experiences and learning styles, thus giving me a unique teaching experience. Seeing a student you have taught and mentored grow and improve under your guidance is one of the most satisfying feelings. My experiences and love of teaching have encouraged me to continually find new and motivating methods to transmit not only notions of grammar and linguistics but also cultural nuances. I am particularly fond of learning about other cultures and relish the chance to work with people from all over the world, make use of my strong language skills, share experiences and learn from others. I believe that this teaching experience would be extremely enriching – both from a professional perspective and on a personal level. I am a strong believer that everything is possible if you really want it.