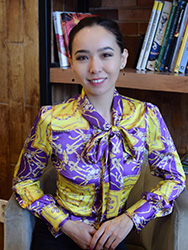 Saule is a team leader for communication and advocacy tasks. She runs raises awareness and advocates for change in government policy on this issue. Saule previously worked for the OSCE, ODIHR and UNDP offices in Kazakhstan, where she dealt with politico-military issues, human rights and media freedom topics.
In a nutshell, she is involved in charity and passionate about social changes. She is a project leader of an inclusive educational programme in Kazakhstan that aims to challenge and change perceptions of how kids, youth perceive people with an impairment. She is a project leader of the organizational capacity programme in Central Asia and delivers capacity building training. Saule holds a Bachelor’s degree in International Relations, Business and Economics as well as a Master degree in Political Science. She is an alumnus of John Smith Trust Central Asia programme and former Vice-President of Membership of Astana Toastmasters Club. She loves travelling, reading, public speaking, networking and passionate about dancing.